Warning: Creating default object from empty value in /home/jimstant/public_html/fetchmyflyingmonkeys/wp-content/themes/platformpro/admin/class.options.metapanel.php on line 49
 Beats dinner and a movie anyday | Fetch My Flying Monkeys
Everyone needs a fleet of flying monkeys to rip the stuffing out of the annoying people in their lives
— Laura
Happy, happy, joy, joy Poor little rich girl

Beats dinner and a movie anyday

There’s an old insane asylum downtown that will soon be demolished and expensive condos built in its place. The proper name of the facility was the South Carolina Mental Hospital. It’s over 175 years old. All the crazies had been moved out of it a long time ago ,and it had been sitting abondoned for years. I drive past it all the time and it’s an absolutely beautiful collection of old stone/granite buildings with these huge oak trees covering a massive yard with a huge tall cast iron fence around it. It’s also very spooky looking. I heard the other day on the local radio station that there’s over 170 acres and that before they knock it down they are going to do tours through it! This got me giddy.

Years ago they also closed one of the oldest prisons downtown (for condos of course) and offered tours months after the prisoners were relocated to a new prison outside of town. A few friends and I decided this would be a lovely way to spend a Saturday. We stood in line for almost two hours, and paid our ten dollars. They took people in groups with the prison guards leading the tours.

It was by far the most entertaining thing I had ever done in Columbia, S.C. The guard led us through the processing area also known as the strip down area, dining area, chapel, the wee little cells where they actually let us go inside and get locked up! We toured death row where the infamous serial killer Pee Wee Gaskins sat for years, until he was hired by a man on the outside to kill a fellow death row roomie that had killed this man’s mother. The officials finally decided Pee Wee needed to go for sure, so a short while later they fried his ass. They pointed out Pee Wee’s death row cell- which basically was like a cage in the middle of a room and the guy’s cell he killed by giving him a radio with explosives. Yes, the man made an exploding radio on death row!

We had one humorless male prison guard leading our group of about twenty people through the different areas telling us stories and such. At one point while walking through a hallway as another group was leaving, I guess we all got loud and giggly knowing we were walking ‘ the green mile’. The guard turned around snapping sharply ” Stay to the right and keep it down!” Everyone sort of looked at each other like “What the hell?” And being the smartass that I am, I loudly said ” Well! If I knew we were going to be treated like this I would have paid extra!” Everyone laughed, and the guard gave me a nasty look. Dirty screw. I’m sure he pictured in his mind beating my ass to a pulp with a blackjack and shoving me in solitary. I smiled at him sweetly and told him he had a purdy mouth.

The tour ended with the warden standing in the execution room beside the electric chair telling us how many executions had taken place there. I got to sit in the chair. It was awesome.

I’m really hoping they offer overnight stays in the asylum. How cool would that be? I would so be there with my sleeping bag, cruxifix, and holy water. 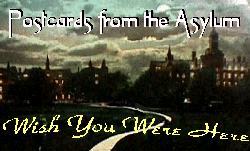 One Response to Beats dinner and a movie anyday